The first aircraft landing field in Savannah went into operation on the south side of Daffin Park. The east-west strip was about 2500 feet long by 450 feet wide. Aircraft operations continued there until 1930. A 730-acre tract of land off White Bluff Road was selected as the site for a modern airport to be developed jointly by the city and county.

The Savannah Municipal Airport opened on September 20 with the inauguration of air service between New York City and Miami by Eastern Air Express. A city resolution named the airport "Hunter Field". A trolley car was used as the first terminal at Hunter Field in the mid 30's. The U.S. Army Air Corps proposed a complete takeover of Hunter Field if a war started. While commercial airlines continued to land there, a decision was made to construct a second Municipal Airport in response to the increased military presence. The City of Savannah acquired a 600-acre tract in the vicinity of Cherokee Hill, one of the highest elevations in the county, and formation of a new airfield commenced under a WPA project. Three runways were constructed running N-S, E-W, and NE-SW; each 3,600 feet long. Before completion of the airfield, the U.S. Army Air Corps found it necessary to take over the new facility and start additional construction to carry out their mission. They named the airfield "Chatham Field" and it was used until the end of World War II as a bomber and crew training base for B-24's and fighter aircraft. Chatham Army Airfield was turned over to the Georgia Air National Guard, and the name was changed to "Travis Field." The War Assets Administration gave the deed to Hunter Field to the City of Savannah.

A new Airport Commission was created by an act of the Georgia State Legislature.

The airport moved from Hunter Field to Travis Field in 1950. The first commercial flight from Travis Field was made by Delta Flight 371 with eight passengers to Atlanta. Runway 9-27 was extended to a length 8,000 feet to accommodate jet aircraft. A new terminal building was completed and served as the passenger terminal until 1994. Today, this terminal is referred to as the Airport Business Center and has been converted to leased space for a variety of different business interests. The new 275,000 sq. ft. Terminal opened in May with 10 gates (expandable to 19 gates). The project included new roads, a new aircraft taxiway and parking apron, storm water ponds, landscaping and a new interchange at I-95 for entry into the Airport (Exit #104). Total cost for the project was $43 million and was completed one month ahead of schedule and under budget. The Airport changed its name to Savannah/Hilton Head International Airport, since a growing number of our customers have destinations in South Carolina and the Low Country. 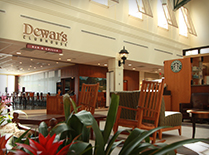 On July 25, 2007 a new Terminal Expansion project, consisting of an additional five new gates and 10,000 sq. ft. of concession space was added to the current concourse. The construction cost of $14 million was supported through the federally funded Airport Improvement Program and Passenger Facility Charge funds. The expansion allowed the airport to be prepared for additional air service anticipated over the next couple of years and for the arrival of larger Regional Jets. The Terminal Expansion was designed to reflect the same charm and appeal as the Airport's main Savannah Square, aesthetically under the new name Hilton Head Isle. Hilton Head Isle houses various retail and food - service, including Dewars Clubhouse and Grill and The Hilton Head Marketplace. The Terminal Expansion was designed to incorporate regional Low Country architecture.

Additionally on October 18, 2007 a new $35 million parking garage was opened. Completion of the facility added 1,690 parking spaces bringing the total parking inventory to 3,690. The four-level facility is conveniently located across from the Terminal and is connected via covered walkways from the first and third levels of the garage. A unique technological feature of the garage is the Signal Park system, which informs passengers of the number of available spaces in each of the four levels, as well as the number of spaces in each row/lane. The new garage is built over the area that was Short Term Parking, directly across from the Terminal. Therefore when construction started in August 2006, the Short Term Parking Lot was closed and all vehicular and foot traffic had to be rerouted around the area. Savannah/Hilton Head International also added new signage for all parking. The new garage is called Long Term/Hourly Parking and the original two-level parking garage is called the Economy Parking Lot. Wireless Network (Wifi) service became free of charge to all who access the service inside the terminal building.
The Airport celebrated the grand opening of a new U.S. Postal Unit located on the lower level of the Terminal at the Visitor Information Center.

Mr. Norton M. Melaver's last term ended August of 2008 as chairman of the Savannah Airport Commission. After Mr. Melaver was appointed in August 1990, the Savannah Airport Commission held meetings in the terminal building at Savannah International Airport on Davidson Drive. During his tenure, the Commission saw many changes such as the opening of the new Airport terminal in 1994, the awarding of slots at Chicago's O'Hare Airport, the tragedies of 9/11, and the addition of Hilton Head to the Airport Name. He was unanimously appointed Chairman of the Commission in May 1990 and led the Commission through years of positive growth in passenger traffic and size, capping off with completion of three major capital improvement projects in 2007. Savannah Aviation Village is formed by the Savannah Airport Commission.